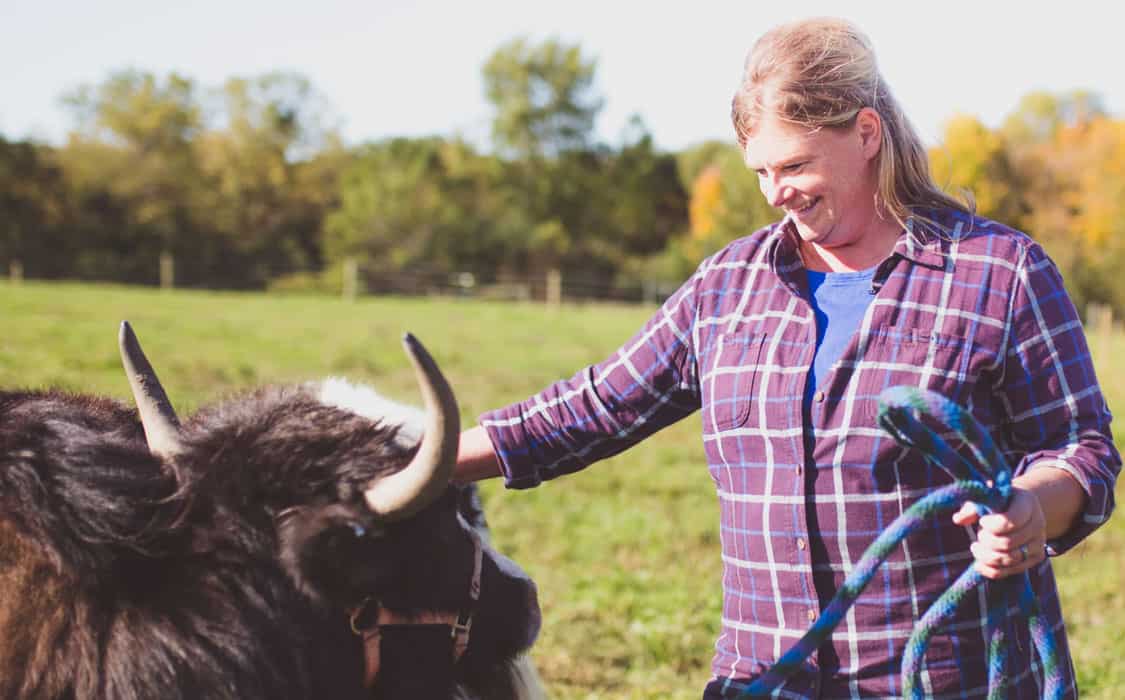 Meet Jericho And A Yak FarmHer

Yak are the story on Melodee Smith’s Minnesota farm.  After growing up on a dairy farm, then moving around the country with her family, Melodee Smith finally landed back on the farm.

Her journey was gradual, first with the house, barn and acreage.  Then they added more pasture acres and finally, the livestock.  Only, Melodee doesn’t do things like everyone else, she sought out a Yak.  One Yak turned into many and pretty soon Clear Spring Yak Farm was born.

I visited the farm on an early fall day, full of sunshine and from my first step on the farm, I felt at home.  It was clear that the Smith family loves their home on the farm by the care and attention to detail.

From the flower-filled window boxes surrounding the restored barn to the Tiffany blue 1949 Chevy farm truck, this FarmHer and her property are truly unique.  Melodee and her pack of pups greeted us at the gate, excited for the day.

After a quick trip through the barn, including a look at an extensive library, a player piano for a quick round of Sweet Caroline, and a stop at the vintage pinball machine, we headed out to feed the bottle baby Yak.

Melodee explained that its mother rejected it and so the family feeds it milk replacer twice a day.  We found it just outside of the barn, hanging out with a llama, horse, and a few goats.  The baby Yak gulped the milk down at record speed and we continued out to the pasture where the rest of the herd was.

There, we met Jericho, the world record Yak.  Jericho has the longest horns ever recorded on a Yak, so he’s a pretty special guy.

Melodee took on Jericho as part of the herd when she bought her herd of Yak.  He is not only a world record holder, but he is also a consecrated animal, meaning he must live out the rest of his life in peace and comfort.  From the looks of that pretty green pasture, he is doing just that.

We couldn’t leave the pasture before I got a quick ride on top of the gentle beast, though…there’s a FarmHer first!

Once we were finished with the Yak, we hopped into Melodee’s farm truck, which just happened to be a Tiffany blue 1957 Chevy truck.

We spun down the road, twisting and turning through hills filled with beautiful fall color until we arrive in the tiny village of Welch and the Bleu Dog Cafe.  We stepped inside the warm little restaurant and met the owners, the Brittons.

My stomach was immediately rumbling at the wonderful smells floating out of the kitchen where the Chef was cooking up Yak burgers for the crew and me.

We talked a bit about the Yak meat, which Melodee shared is the leanest red meat you can get.  She said the meat has an “airy” consistency to it.  Despite being super lean, the burgers were served and it was one of the most delectable burgers I can remember having.  EVER!

From the homemade warm and toasty bun to the fresh garlic aioli and local greens, it was a meal I won’t soon forget.

Seriously….you need to make your way to the Bleu Dog Cafe!

My visit to a Minnesota Yak farm was a day to remember.  From the FarmHer who is the steward of the land she lives on, and the care and concern she puts into the herd of Yak, to the calm and inquisitive creatures that I met out on the green pasture, there was a serene feeling all around Clear Spring Farms.  Then, to a brief visit to Jericho, who is a really special animal, this is one road that was worth the trip down!

3 thoughts on “Meet Jericho And A Yak FarmHer”