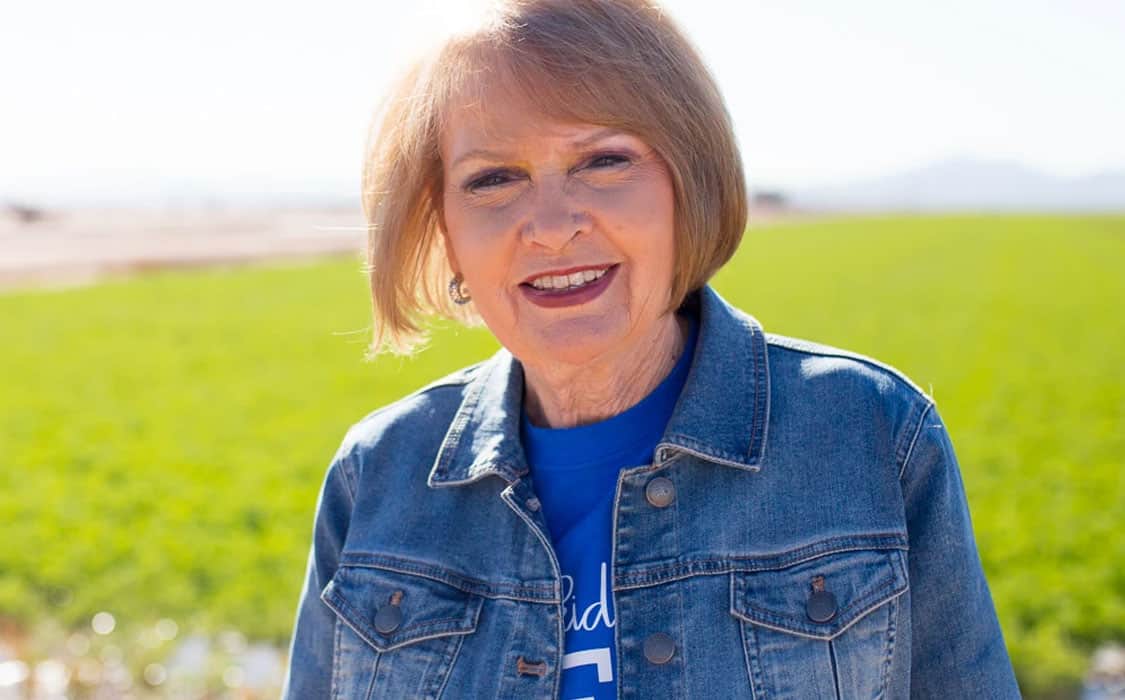 Sherry Saylor is a FarmHer that I met a few years ago and from the moment I met her I knew I had made a new friend.  Born a city girl in South Carolina, she moved across the country at age 23 after she married her husband Rick. They went back to his family’s farm in Arizona and she has never looked back.

In the early days, she adapted quickly to farm life. They joined the Arizona Farm Bureau and Sherry found her third home. Rick and Sherry farmed and raised kids, while Sherry also worked off-farm as a Counselor at the elementary school in Buckeye.

Back then the town was about 10,000 residents and today has soared to over 65,000.  Sherry still works at the school and Rick runs the farm but a new addition in the past five years has been Sherry’s role as the President of the American Farm Bureau Women’s Committee.

This is just the latest in a long line of involvement in the organization where she has spent over 40 years giving her time and focusing her efforts. She credits the Farm Bureau programs for teaching her the importance of sharing agriculture with the rest of the world, and for giving her the tools to do just that.

Sherry first held leadership positions in the state Women’s Committee before moving on the National level. It coincided perfectly with a slight pull back on the farm and today the Saylor’s balance it all.

I arrived on a sunny Friday morning to Buckeye Elementary School just after Sherry had given the morning announcements.  I met her in her office where she told me a little about her job as a Counselor and how important it is to her community and school.

I know without a doubt after seeing Sherry at work and knowing her these past few years that she is a blessing to those she serves.

In addition to the many roles she plays as a Counselor, she also takes her role as an advocate for agriculture seriously and spreads that to the kids at her school.

It was a cute story, but more importantly, it connected with the kids and the fun wasn’t over when the story was. Sherry spent more time talking to the kids, asking them questions and taking the time to answer them thoughtfully and with respect.

From the school, we headed out to the farm, just outside of Buckeye, Arizona.  There Sherry introduced me to her husband Rick and grandson who was hanging out with Grandpa for the day.

Next up was my lesson for the day from Sherry, a lesson about Alfalfa! We walked out behind the house to the field filled with green.  She explained that it had just been cut; one of 9-10 cuttings a year due to almost year-round sunshine and heat in Arizona!

We then headed down the field a bit to where the irrigation was coming in.  There she explained that the field is irrigated with each cutting, giving the plant the nourishment it needs to grow again. Because water is a precious resource in the desert, Sherry explained that farmers have to buy the water they use to irrigate and they do that ahead of the season so they can make the planting decisions based on the resource.

From there we drove just down the road to our final stop, the dairy where Sherry and Rick sell all of their alfalfa to! We stopped out for a quick look at the happy cows, which were eating at the time.

Sherry explained that some of the alfalfa is green chopped and fed to the cows nearly instantly. They love the sweet grass which is full of moisture.  Some of the alfalfa that isn’t used as green chop is then baled and saved for later to be mixed into a ration of feed that works best for the cow’s nutrition.

My first trip to a desert farm was educational and a cool experience, made even sweeter by the FarmHer of the farm.

Sherry is one of the most amazing women I know. She genuinely cares about people and is warm and inviting, making new friends on her path and leaving comfort in her trail.  Comfort to the kids she serves at school, comfort to the parents out there making food decisions, comfort for the women in her presence at the Farm Bureau and comfort to all of us who have the blessing of crossing her path.